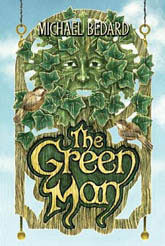 But The Green Man seriously deserves that one-word description.

The novel by Governor-General's Award-winning Toronto author Michael Bedard is aimed at the young adult market but offers no goblins or fairyland escapades. Rather it features that staple of realistic young adult novels, a sensitive young girl trying to find herself. Fifteen-year-old Ophelia, who prefers to go by O, is sent east by her father from the west coast of Canada to spend the summer with his older sister Emily. An aging and eccentric poet, Emily runs a dilapidated bookshop in Caledon called The Green Man.

Emily has her own secret demons to deal with and the bookstore is the scene for some gently bizarre occurrences—all mysteries to spark O's own poetic imagination.

A sinister magician in Emily's memory and a possible changeling, who makes friends with O, enter the scene but never in a precious fashion. Rather, the real enchantment of The Green Man (the title itself referring to a mythic figure of nature) lies in literature. The presence of the many great writers whose books fill the bookshop are felt by the girl, as we suspect they are by the aunt. We are also privy to some of the confessional verse they each compose themselve—which, frankly, doesn—t grab me as poetry but adds to the novel's atmosphere of creative energy engendered by the novel's own prose.

Bedard's writing is never self-consciously —poetic— but it simply and sinuously develops the ephemerally magical milieu. Until near the end of the twisting story, nothing much truly extraordinary happens, but ordinary incidents reverberate with undercurrents of meaning.

It is unusual to find a novel for young people that takes serious literature as a backdrop to its coming-of-age story. It would seem almost impossible to make this interesting to young people today. Who reads—or writes—poetry any longer?

But I suspect this novel would entrance at least a subset of youth, those artsy and bookish types who may still seek life experience in literary discovery and self-expression. And perhaps the quasi-mystical bent of The Green Man will draw in some of those other teens.

Ten years from now I'd like to read a sequel to The Green Man showing the author that O develops into. Somehow I don't think she'll be writing about wizards, goblins and talking animals.