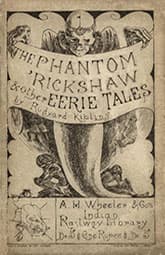 CRITIQUE | THE TEXT | THE MOVIE

The sun setting on empire

An unfair charge against Rudyard Kipling's story, "The Man Who Would Be King", is it's not very credible. Full of British Empire arrogance that can imagine a couple of white, soldierly ne'er-do-wells could manage incredible feats of perseverance to venture from northern India over frigid, mountainous terrain into foreboding, supposedly uncivilized lands and in short order be hailed as gods, take over as rulers and uncover hoards of unimaginable wealth deposited by Alexander the Great two millennia earlier.

What critics who charge implausibility are missing is "The Man Who Would Be King" is an intentionally tall tale.

Perhaps not as fabulous as Kipling's Jungle Book or Just So stories. But in line with some of his other imaginative tales. This long story—sometimes called a novella—first appeared in book form in the Kipling collection The Phantom Rickshaw and other Eerie Tales.

It doesn't involve supernatural or horror elements but it is told with tongue partly in cheek. Perhaps Kipling placing himself in the story as a newspaperman (which he was) essentially narrating it, gives some readers the idea he is purporting to relate an actual incident. But that's just a trick of clever writing.

"The Man Who Would Be King" is more in the category of far-fetched, lost-world adventures, like H. Ryder Haggard's fictions featuring Allan Quatermain, written around the same time, or the Indiana Jones movies in a much later period. Not to be taken too seriously. And note, the adventure's disastrous outcome deflates the romance of derring-do. It's more a satire on that kind of fantastic story, bringing it back to earth in grisly fashion.

However, a second charge embedded in that first one is more difficult to deal with. Is Kipling in this story displaying his colonialist attitudes? Is he suggesting the British can—or should—subjugate less-developed folks for their own good?

The adventurers Daniel Dravot and Peachey Carnehan, despite their self-serving motivations and initially violent means, are shown actually bringing peace and order to the people of Kafiristan (part what's called Afghanistan today), preventing them from killing each other.

Their downfall when it eventually comes is due to some personal failings. Imagine what a really disciplined British colonial force could accomplish in the area, you're asked.

At the same time, "The Man Who Would Be King" could also be taken as a warning against what not to do. In this reading, Dravot and Carnehan in Kafiristan are stand-ins for English imperialism in India. The tactics of the two conmen in subduing the people, their mercenary motives, their deceit, and their self-centred blindness to crucial local mores bring about the fall of their little empire, just as British misbehaviour threatens to (and eventually will) destabilize imperial rule in India.

If this analogy is upheld though, it hardly constitutes a progressive critique on the part of Kipling. It's on par with complaints often made by him and other defenders of colonialism who have lived with the conquered peoples: you can better control them if you understand them better. Learn their ways and rule with a soft glove.

Despite apt criticisms, "The Man Who Would Be King" has outlasted the British Empire. It continues to be recognized as a great story in part because it is so well written—which is maddening for those of us who would prefer to be able to dismiss it on moral grounds.

Just as we readers follow the narrator's lead in becoming, against our wills, charmed by the nasty, naïve, grasping but oddly principled dreamers who aim to become kings.

The narrative is more complicated than in most Kipling stories, beginning with a roundabout sequence of events leading to meeting the outlandish twosome with their outlandish schemes and checking in on them from time to time. We don't really get too much detail of their journey or of their rise and reign in the foreign land, as the narrator is not with them. We get most of their story as it is later told to the narrator by one of the scoundrels.

Even then it's told in fragmented fashion, implying more detail than is actually explicit in the text. We get enough to take in the main events and the suggested flavours of it all. The compact storytelling could have been unwound and expanded into a novel if Kipling had wanted—there is certainly story enough here. That may be why "The Man Who Would Be King" is often considered a novella, despite not really being long enough in words alone.

CRITIQUE | THE TEXT | THE MOVIE