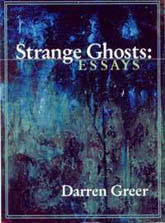 Short story fans should appreciate this novel. So should hockey fans.

The Uninvited Guest is purportedly the story of one Tony Chiello who accompanies the Stanley Cup on a trip to Romania where he learns something about himself. But the experience of reading this novel is like being continually buttonholed by individuals who have intriguing personal stories to relate.

As Toronto writer John Degen intends. The book's title is taken from that Coleridge poem we all studied in high school, "The Rime of the Ancient Mariner", in which a wedding guest is sidetracked by a strange old man with a wondrous tale to tell. But throughout The Uninvited Guest we are detoured through many stories that would almost stand on their own.

The larger narrative starts with a dead body in a hotel room. the Stan Cooper, the coincidentally named keeper of the Stanley Cup, has died while on tour with the cup and his friend Tony is returning both of them to the National Hockey League. So we get the life story of "Two-Second" Cooper, nicknamed not for his lack of sexual prowess but for a drastic mistake he once made as timekeeper in the 1951 NHL playoffs that threw a crucial game to the home-team Maple Leafs. (Hockey lore and fiction are so well mixed in this novel that I was never sure which was which. Was there really a time mixup in that famous series?)

Tony, who had failed as a hockey player himself, either because he was too short or because he just hadn—t wanted stardom badly enough, succeeds his late friend and is off around the world as the cup's constant companion. And it seems everywhere he goes he has a small adventure with short-story implications himself. Or he is told other people's stories.

These anecdotes are actually more interesting that Tony's own progress, especially when he accompanies a hockey star back to his native country of Romania to show off the cup his NHL team has just won. The star is getting married there (another Ancient Mariner parallel). But the greater story—told in many segments by various individuals—is about how his family had many years  earlier managed to escape the repressive Ceaucescu regime and come to Canada.

Author Degen was previously known mainly as a poet, a fact I'm reluctant to note since anyone who's read other novels by former poets might be turned off by it. But—high praise—nothing in it reads like the work of a poet. No complex metaphors, no precious language, no need to consult reference works to understand what is happening. It all goes down like the work of a sports writer (more high praise!). Which is to say, it's direct, deceptively easy-to-follow, and colourful writing.

And the along-the-way insights into Canada's national game, as well as Romania's national game (you'll never guess what it is), are terrifically entertaining for aficionados of either.

Perhaps The Uninvited Guest doesn't quite carry the emotional or intellectual heft of great literature. It's a novel you can pick up and put down whenever he like. But each time you pick it up you'll be glad. And you will want to finish it.

When you hear the word "essays", you probably think either about those dreaded school assignments or about portentous thoughts by great thinkers that no one reads any more if they don't have to.

Essayists have been replaced in this era by newspaper and magazine columnists, who occasionally recycle their short diatribes in book collections.

How daring then for a Toronto playwright and novelist to proclaim his genre connection on the cover of his latest book. "Essays by Darren Greer" it says on the cover of Strange Ghosts.

But these are rather intimate essays. One of them, "The Various Names of God", begins "I first told my father I was gay in the summer of 1987, when I was nineteen years old" and follows the course of his evolving relationship with his father. More of a short story really, except for it being non-fiction.

Other "essays" pick up the story of Greer's family but also delve into matters such as how Sept. 11 and war in Iraq have changed his relationship with a city he loved, New York. Demonstrations, Cambodia, the Middle East, art, the moon landings, theatre, Paris—diverse topics come under discussion but all from Greer's engaging personal perspective.

The word "essay" comes from the French for an attempt or trial. I suppose that's appropriate as Greer is using the form to try to communicate complex matters in a directly human fashion that touches the reader as well as making him or her think.

What we need though is a word to describe this form when the attempt is as successful as Strange Ghosts is.

The Canadian UFO Report is a strange book. Not because it deals with alleged extraterrestrial visits to earth. Thousands of books do that. Also quite a few books (although not nearly as many) debunk the UFO myths.

But this volume manages not to take sides on the claims of alien visitation. Proceeding through many of the famous and lesser-known UFO reports in this country, along with other bizarre stories of the paranormal, authors Chris Rutkowski and Geoff Dittman explain some away and leave the question open on others.

Alas for prospective book sales, their conclusion of "no definite conclusion" is unlikely to excite the believers who devour the pro-alien hype. And skeptics like me will also be left dissatisfied. After more than a century of reports and after decades of serious study into thousands of cases, not a single shred of hard evidence has ever been found to support the claims of ET sightings. At some point we have to say that based upon the lack of evidence, it seems highly unlikely the lights-in-the-sky anecdotes are reports of little grey men in their flying saucers but are more prosaically explained.

Rutkowski and Dittman do give these ordinary explanations too and they admirably provide other information that can be used by both sides. But too often they report without evaluation cases that have been thoroughly discredited elsewhere, leaving the mistaken impression that a large number of credible reports are on record.

The Canadian UFO Report is a book that would appeal most to the mild believer or the soft-core skeptic in the great white north.

The Uninvited Guest
Get at Amazon: Canada

Strange Ghosts
Get at Amazon: Canada

The Canadian UFO Report
Get at Amazon: Canada