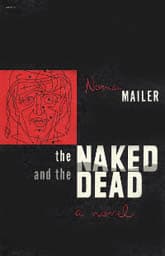 CRITIQUE | THE TEXT | THE MOVIES

Nobody could sleep. When morning came, assault craft would be lowered and a first wave of troops would ride through the surf and charge ashore on the beach at Anopopei. All over the ship, all through the convoy, there was a knowledge that in a few hours some of them were going to be dead.

The natural role of the twentieth-century man is anxiety.

Aaah, there ain't a goddam place you can get a million-dollar wound that it don't hurt.

And they all knew they were going to die soon with a sentimental and unstated English attitude which was completely phony. It came from books they had never read, and movies they shouldn’t have seen; it was fed by the tears of their mothers, and the knowledge quite shocking, quite unbelievable, that a lot of them did die when they went overseas. Its origins were spurious; they never could connect really the romance of their impending deaths with the banal mechanical process of flying an airplane and landing and living in the barren eventless Army camps that surrounded their airfields. But nevertheless they had discovered it was a talisman, they were going to die soon, and they wore it magically until you believed in it when you were with them.

"Yeah, fighting a war to fix something works about as good as going to a whorehouse to get rid of a clap."

CRITIQUE | THE TEXT | THE MOVIES